OrganicEye backgrounder on 2020 appointees to the National Organic Standards Board 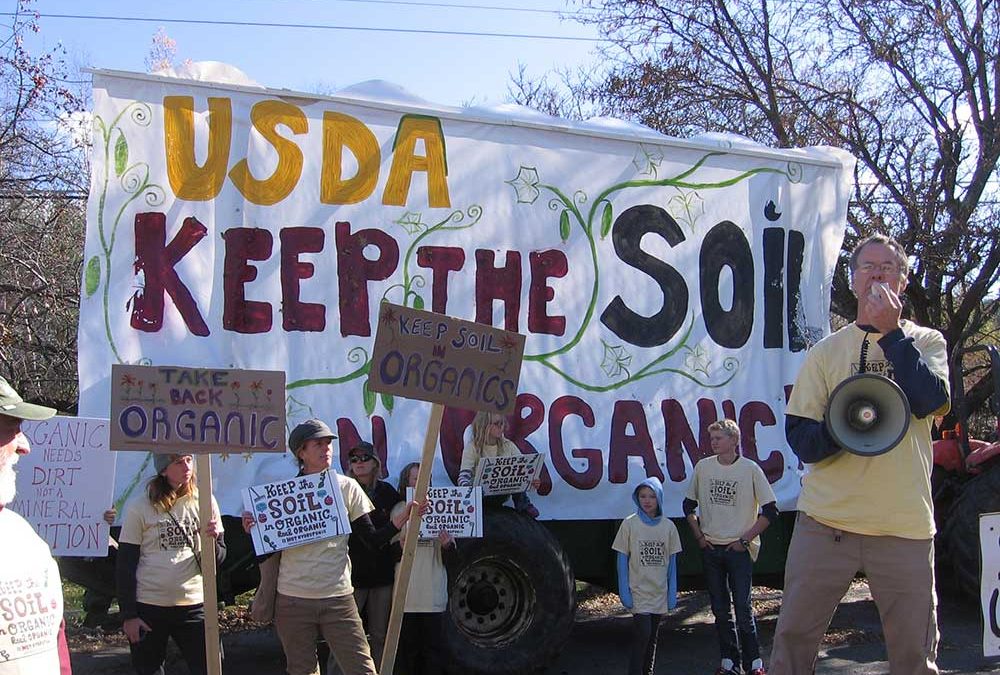 This analysis attempts to connect the dots profiling the relationship new appointees to the National Organic Standards Board have with corporate agribusiness (most of which are engaged, primarily, in conventional agriculture, food processing, and/or distribution).

Although it attempts to create an image as a group operating in the public’s interest, the Organic Trade Association (OTA) is an industry trade association representing the business sector. The OTA plays a big role in setting organic policy, often at odds with the Organic Foods Production Act (OFPA) and organic integrity as defined by founding members of the organic community:

A number of the most respected businesses in the organic industry have also recognized the concerns expressed by the nonprofit community. These include Nature’s Path, the largest manufacturer of certified organic breakfast cereal, and the iconic soap manufacturer, Dr. Bronner’s. Both companies very publicly withdrew their membership and financial support from OTA.

Nathan Powell-Palm operates at 1,000-acre certified organic farm outside of Belgrade, Montana. Mr. Powell-Palm has a long resume of extensive involvement with the OTA and some of its affiliates.

Mr. Powell-Palm started growing his operation at a young age, and he serves on the board of the Montana Organic Association (MOA), one of just two organic farmer groups that we know of that endorsed an OTA proposal for an industry checkoff (tax) on agricultural producers. Unlike other farm groups, another MOA board member sits on OTA’s Board of Directors.

Mr. Powell-Palm has spoken at OTA conferences, participated in their Capitol Hill lobby days, and, in 2019, received the organization’s coveted “rising star” award. He is also trained as an organic inspector. He will sit in an NOSB seat reserved by Congress for a farmer.

Kimberly Huseman works for Pilgrim’s Pride, an $11 billion business enterprise (2018) and the second-largest conventional poultry producer in the United States. Pilgrim has a growing interest in organic production as well. Ms. Huseman’s responsibilities include procurement of feed grain for their livestock. She will sit on the NOSB in a slot reserved for a handler.

Pilgrim, an OTA member, is part of an industry that has been under scrutiny for depending on a copious amount of imported feed rather than supporting and purchasing from domestic organic farmers.

Therefore, Ms. Huseman’s positions on this issue will be closely watched. The NOSB has also failed to resolve a number of scale-related poultry issues, in part due to the efforts of outgoing NOSB member Ashley Swaffar, who also worked for vertically integrated poultry companies.

Another poultry-related issue, a years-long controversy the NOSB has stalled on resolving, that will now be considered by Ms. Huseman, is the continued use of the synthetic amino acid methionine. Many public interest groups have accused major poultry producers and OTA of paying lip service to phasing-out the feed ingredient utilized, in part, to “supercharge” their production and facilitating confinement, factory farm conditions that are considered illegal in organics.

Gerald D’Amore works for a major conventional/organic industry produce handler, Munger Farms, which is a member of OTA. He has previously been employed by a number of other major, primarily conventional, agribusinesses. Many of these companies are also OTA members, including Dole, Chiquita, and Driscoll’s Strawberry Associates. Driscoll’s is certified by the nation’s largest USDA-accredited certifier, California Certified Organic Farmers (CCOF). CCOF certified early adopters of hydroponic technology, including Archi’s Acres in southern California. In light of the laws governing organics and previous NOSB decisions, most public interest groups believe soilless production is illegal. CCOF is among OTA’s largest financial supporters.

Mr. D’Amore is listed as a former vice president of Driscoll’s, the world’s largest berry marketer. With his experience in the company that helped pioneer certified organic hydroponic production, his voice on certified organic hydroponics will be watched carefully. Mr. D’Amore is currently listed in his LinkedIn profile as an independent consultant, although this was not disclosed by USDA, and will also be sitting in an NOSB handler seat.

Mindee Jeffery has recently joined Eastside Food Co-op, in Minneapolis, as a grocery manager. Previously she was with a food retailer trade association and (prior to that, she spent 15 years at Good Earth’s Natural Foods, in California) an OTA member. She served as chair of the California Organic Products Advisory Committee (COPAC).

She nominated Karen Archipley as her replacement on COPAC. Archipley, a small-scale hydroponic-greenhouse grower from San Diego County, served as a spokesperson for an “Astroturf” group formed and financed by Driscoll’s, Wholesome Harvest, and other major hydroponic agribusinesses.

Unlike many of the other nominees, Ms. Jeffrey has a long-term, documented involvement in the organic movement and we hope that her independence and policy positions will be driven by the constituency at the respected member-owned cooperative grocer where she now works. She will sit in an NOSB seat reserved for retail.

Wood Turner currently serves as Senior Vice President of Sustainability at an investment firm, Agricultural Capital. Prior to that he worked for Stonyfield Farms, a major OTA member and contributor, while it was owned by Groupe Danone, the largest dairy concern in the world. According to press accounts and industry insiders, OTA, with Stonyfield’s leadership, brokered a provision in federal law, commonly known as The Dark Act, that established a weak labeling law concerning disclosure of genetically engineered ingredients, stripping states (like Vermont)—with preemption language—of the right to adopt more stringent state food labeling disclosure laws. Groups have pointed out that the “compromise” legislation has led to deceptive GMO [genetically modified organisms] labeling of food that sends consumers to company websites, which are misleading and fraudulent in extolling the benefits and safety of GMOs. The legislation also provides for the use of a warm and fuzzy logo.

With a background in urban and environmental planning, Mr. Turner will serve on the Board in an environmental protection and resource conservation seat.

Click here to view the announcement and bios released by the USDA for these new NOSB members.

Ashley Swaffar was appointed to the NOSB in 2015 as a “farmer.” At the time, she was employed by Arkansas Egg, a vertically integrated egg supplier that also did contract production for Vital Farms. Nothing in her application, which was secured through a FOIA request, indicated that she “owned or operated” an organic farm, as required by law. A suit was filed against USDA challenging her status on the board, along with that of Ms. Carmella Beck, a Driscoll’s employee who had also been appointed to a farmer seat. (Ms. Beck, a past OTA Member of the Year award recipient, left the board in 2015.)

The suit was filed on behalf of a working organic dairy farmer in Wisconsin and a beef producer in Ohio who had both applied for the farmer seats on the NOSB and had been passed over. A hearing on the merits of the lawsuit never took place. USDA attorneys (whose salaries are paid for by taxpayers) successfully argued that these farmers had no standing to bring the legal action. It is difficult to understand who would have standing in a legal challenge of this nature.

Subsequent to her separation from Vital Farms, an OTA member, Ms. Swaffar has operated a 7.5-acre organic farm in Arkansas, marketing at least partially through a trailer on her front lawn, and also has promoted herself as a consultant to the poultry industry.

Ms. Swaffar had a consistent record, nearing 70%, of voting in agreement with OTA lobbyist recommendations (on contested votes), including supporting hydroponic “organic” production.

Unlike some of the previous board members holding the retailer seat, she voted almost 70% of the time consistent with OTA policy on contested votes.

Tom Chapman was also appointed to the NOSB in 2015 to a handler seat. He is responsible for sourcing ingredients for California-based Clif Bar, an OTA member, with many key products sold as “made with organic ingredients,” rather than as certified organic. This is due to either not sourcing more expensive ingredients as certified organic and/or by using soy protein isolate or other materials that do not meet organic standards. Mr. Chapman also served as NOSB Chairman.

Like incoming board member Mindee Jeffery, Mr. Chapman also sits on the California Organic Products Advisory Committee and, additionally, is a member of the management committee of CCOF. During Mr. Chapman’s tenure on the board, CCOF successfully lobbied the NOSB to not intervene to prohibit hydroponic production, despite its inconsistency with the law.

In his leadership role as a former NOSB chair, Mr. Chapman strongly influenced the changing of NOSB process, the allowance of synthetic substances, and the permitting of practices, like hydroponics, that are viewed by organic advocates as undermining organic integrity and consumer trust in the organic label.

In this regard, it can be argued that, instead of building trust in the organic label, Mr. Chapman has done more damage than any other NOSB member—he has undermined organic integrity by personally shepherding through a wholesale rewrite of the Policy and Procedure Manual that dictates how the NOSB operates. This stripped power from the expert stakeholder panel and gave it to the political appointees and bureaucrats at USDA.

He aligned himself with former NOP director Miles McEvoy, who unilaterally eliminated the long-standing NOSB voting procedure for sunsetting synthetic/nonorganic materials—a default process of removing synthetics from the National List of Allowed and Prohibited Substances every five years, unless two-thirds of the board voted to relist the chemicals.

It should be noted that the initial, more cautious process, created by Congress, oversaw exponential growth of the organic sector and created economic stability for this important sector of agriculture worldwide based on consumer trust in the label and the governing process. As amended, two-thirds of the board are required to remove a synthetic from the National List. Materials never, in essence, sunset unless an extraordinary supermajority of the board takes action.

Mr. McEvoy has since left the USDA. The Cornucopia Institute filed ethics charges against Mr. McEvoy—although the USDA has never made the investigative documents available to the public. He now acts as an industry consultant. His clients include CCOF, the nation’s largest certifier (and the beneficiary of favorable rulings while he ran the NOP).

Harriet Behar was appointed in 2016 to fill the balance of an open term on the NOSB. She exemplifies the kind of expert organic industry stakeholder that was envisioned when the community collaborated with Congress in establishing the NOSB as an integral part of OFPA—a body designed to act as a buffer between organic rulemaking and corporate lobbyists.

Ms. Behar has a diverse background including over 30 years as a certified organic grower, commercial experience as the first marketer at CROPP/Organic Valley, an independent organic inspector, reviewer for a number of certifiers, longtime expert staffer with Midwest Organic and Sustainable Education Service (MOSES), and similar work more recently with the University of Wisconsin.

Her tenure on the board included a year as chair, where she was widely praised for her evenhanded approach and efforts to build public trust in the organic label. Her voice was decidedly aligned with the independent faction on the NOSB.