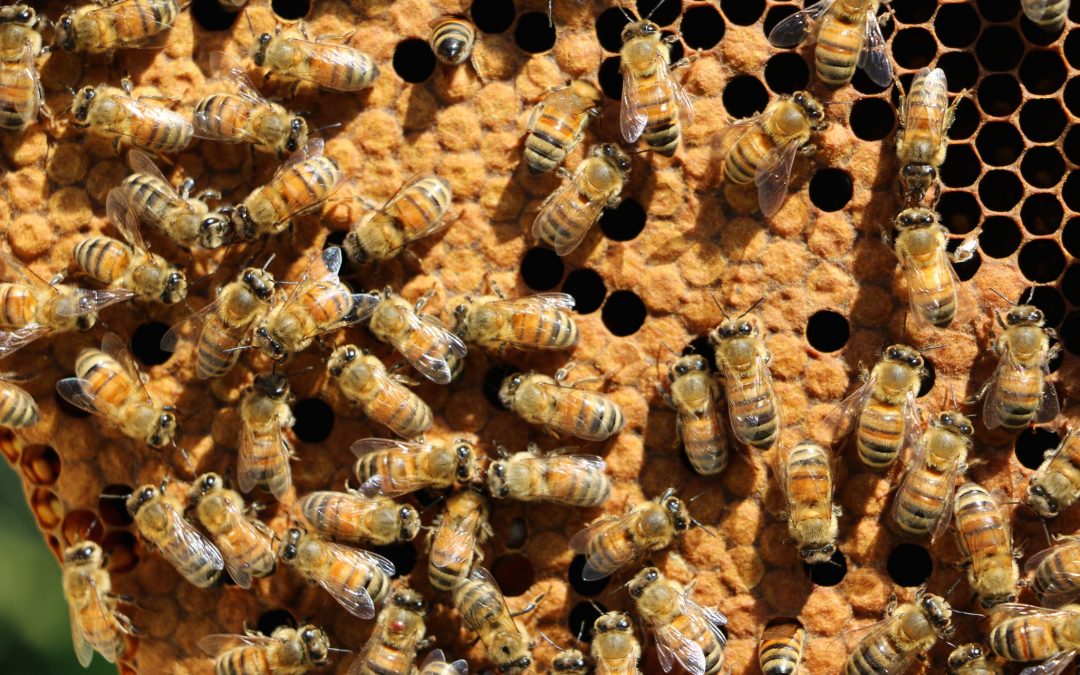 Scientists from Imperial College London have just published their recent research on impacts of pesticides on larval bumblebees exposed through neonicotinoid-contaminated food sources. Many studies have looked at the devastating impacts of pesticides on adult insects, including pollinators — and bees, in particular. This research, however, examines how exposure to the neonicotinoid imidacloprid, through consumption of contaminated nectar and pollen during the larval stage, affects bumblebees (Bombus terrestris audax). It finds that these exposures cause abnormal brain growth in some parts of the bees’ brains, and significantly impairs learning ability compared to bees who were not exposed. Advocates maintain that neonicotinoid pesticides should be banned for their widespread and severe damage to insects and the environment broadly, in addition to human healthconcerns.

Neonicotinoids (neonics) comprise a class of pesticide used intensively in many parts of the world. They may be applied to plant foliage, or directly to soils as a drench, but the predominant use is for seed treatment. These pesticides are banned or restricted in some places, including in the European Union, France, Germany, and Italy; some states have also worked to rein in their use.

Previous research out of Harvard University has documented the neurotoxic impacts of neonicotinoids on adult bumblebee behaviors. The subject study looked to learn more about the risks of pesticide exposure on bee broods, after the bees emerge into adulthood, from the entry (into the colony) and consumption of food contaminated with a neonic — an area of investigation that has received scant attention. The researchers note, in the introduction to their study paper, that “no study to date has investigated how pesticide exposure during early-stage development affects brain developmental plasticity and its association with behavioural performance in older adulthood.”

Neonics can easily end up in bee food sources because of their preponderant agricultural uses. Once applied, they move through a plant’s vascular (circulatory) system, and show up in the plant’s pollen, nectar, and “guttation droplets” — the “sappy” exudate on leaf edges or tips. (Guttation happen when root pressure is high and transpiration is low. It often occurs at night, and when soil and/or air moisture levels are high.)

Foraging bees pick up pollen and nectar in their travels, and bring them back to their colonies to feed bee larvae and baby bees (aka “brood”). They also feed the honey they produce (by chewing pollen and mixing it with saliva) to the colony’s developing brood. All of these can be sources of pesticide contamination from pesticide-treated flowering plants. To make matters worse, research has shown that some bees actually prefer food sources that contain neonicotinoid pesticides, and may show “possible symptoms of addiction” to them.

Further, bee larvae have been shown to be vulnerable not only to a single pesticide, but also, to synergistic effects of the plethora of pesticides that may end up in the colony’s hive, plus the so-called “inert” ingredients in pesticide compounds. Researchers in one study noted, “One hundred and twenty-one different pesticides and metabolites were identified in the hive with an average of seven pesticides per pollen sample, including miticides, insecticides, fungicides, herbicides, and insect growth regulators.”

The study experiment provided imidacloprid-treated food at different developmental stages in order to examine the effects on worker bees during their brood development stage, early-adult stage, or both stages. The researchers tested the bees’ ability to learn to associate a smell with a food reward, with 10 trials per bee. Using micro-CT (computed tomography) imaging, the scientists looked at brain development across three groups: (1) those provided with a nectar substitute that contained neonicotinoids, (2) those who were fed no pesticides, and (3) those who were fed pesticides only after their emergence as adults.

The brains of nearly 100 bees were examined, and the team found that an important part of the bee brain involved with learning — the mushroom body — was smaller in those exposed to the neonics. Smaller mushroom body volume is correlated with poorer performance in learning tasks. Bees fed with contaminated food in the larval stage show significantly impaired learning ability compared to those that are not.

The researchers found that “bees exposed to pesticides during larval development, but not as adults, showed similar learning impairment and mushroom body volume reduction when tested at both three and 12 days as an adult. This suggests that at least within the unexposed nine days they were adults, the effects of larval exposure could not be overcome, pointing to a potentially permanent effect.” The study paper comments that “these findings highlight that the first 72 hours of adulthood must be important in behavioural development, but also represents a susceptible developmental window to insecticide exposure, showing the importance of considering different life-stages when assessing pesticide risk.”

Lead study author Dylan Smith, PhD of the Imperial College Department of Life Sciences, pointed to some additional implications of these results: “There has been growing evidence that pesticides can build up inside bee colonies. Our study reveals the risks to individuals being reared in such an environment, and that a colony’s future workforce can be affected weeks after they are first exposed. . . . Bees’ direct exposure to pesticides through residues on flowers should not be the only consideration when determining potential harm to the colony. The amount of pesticide residue present inside colonies following exposure appears to be an important measure for assessing the impact on a colony’s health in the future.”

Phys.org reports the comments of head researcher Richard Gill, PhD, from the Imperial College London Department of Life Sciences: “‘Bee colonies act as superorganisms, so when any toxins enter the colony, these have the potential to cause problems with the development of the baby bees within it. . . . Worryingly in this case, when young bees are fed on pesticide-contaminated food, this caused parts of the brain to grow less, leading to older adult bees possessing smaller and functionally impaired brains; an effect that appeared to be permanent and irreversible. . . . These findings reveal how colonies can be impacted by pesticides weeks after exposure, as their young grow into adults that may not be able to forage for food properly. Our work highlights the need for guidelines on pesticide usage to consider this route of exposure.”

Given the economic and food system importance of pollinators, government and the public sector must act — and quickly — to arrest their decline, to which pesticides are a major contributor. Beyond Pesticides is a resource for activists pushing to end pesticide use and adopt least-toxic, organic and regenerative agricultural and other land management practices. Learn more about the role of pesticides in pollinator decline at the Beyond Pesticides website page, What the Science Shows. See the BEE Protective page for information on protecting bees and wild pollinators from the ravages of pesticides. Join the movement to end destructive pesticide use by engaging with elected officials at the local, state and federal levels, and supporting local efforts to shift to organic practices.