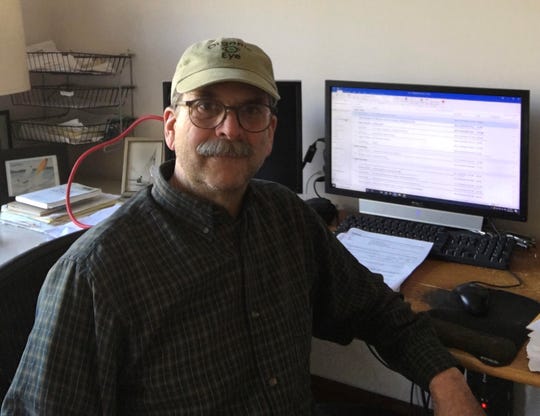 Being all sequestered at home now, here is an interesting story on home technology and a bit of nice ink for OrganicEye and Beyond Pesticides in Wisconsin’s largest-circulation newspaper (the Milwaukee Journal Sentinel). The reporter is a long time business and agricultural journalist who I’ve worked with for at least a quarter-century (now being furloughed by Gannett one week per month—newspapers, that were already struggling, are in crisis because of an instant drop in ad revenue as a result of so many businesses beings shuttered). If you are lucky enough to have a good local newspaper, now is the time to subscribe to make sure that you stay well-informed and there is a check and balance on local, state and national government.

Web cameras, noise-canceling headphones, wireless routers, printers and other office gadgets are in strong demand as millions of Americans hunker down to work from home longer than they expected.

Best Buy, Office Depot and other major retailers have been sold out of many webcams that are an improvement over the video conferencing camera built into laptops. It’s that way on some of the biggest consumer websites, too.

From freezers to wi-fi extenders, sales of at-home products have surged.

“People are trying to find ways to get through this time in their own way,” said Chad Abrahamson, general manager of the Best Buy store in Menomonee Falls.

Terence Ow, an associate professor of information technology at Marquette University, says he turned to eBay for a webcam after striking out elsewhere.

Logitech, one of the most popular brands of webcams for consumer and business use, said it was taking 14 days to process orders and that many models were out of stock.

Some vendors were back ordered until May or even July, and there was price gouging going on for some popular webcams.

“For the short term, there’s going to be a big run on almost anything needed to outfit a home office,” said Eric Plam, president of Skyroam, a San Francisco company that’s seen a spike in sales of its mobile broadband products.

“Nearly all of the electronics like webcams are made in Shenzhen, China, and those supply chains have been disrupted. China’s coronavirus lockdown really slowed manufacturing,” Plam said.

As factories return to normal production, the shortages should be easing.

“It’s kind of like what we saw with the run on toilet paper. It might not be on the shelves today, but it’s not going away,” said Brian Kirsch, an information technology instructor at Milwaukee Area Technical College.

Make the best of what you have

For now, at least, most people can get by just fine with the web camera built into their laptop if they pay attention to positioning, lighting and sound. Kirsch recommends using Open Broadcast Software, a free program for Windows or Mac that provides creative controls and is easy to learn.

And you don’t have to aim for perfection.

“I was giving an online lecture when one of my dogs walked into the background,” Kirsch said. “Things like that are going to happen, but I think people understand. We’re all in the same boat now.”

Still, paying attention to details like sound quality can make a big difference in a video conference. Without a good microphone, “it sounds like amateur hour,” said Mark Vena, senior analyst at Moor Insights & Strategy, a technology research and analyst firm based in Austin, Texas.

Vena has worked from his home in California for many years. But he says many people, forced to do that for the first time on a regular basis, don’t fully grasp the challenges.

You can’t always replicate the technologies found in corporate offices.

“Casual internet use is one thing, but very intense applications that involve streaming data back and forth are entirely different,” Vena said.

From his farmhouse near La Crosse, Mark Kastel uses a web camera for video conferences with thousands of people across the country. He also uses it to stay in touch with his office in Washington, D.C.

Kastel is the founder of Organic Eye, a nonprofit that monitors the organic foods industry and is the investigative arm of the Washington-based nonprofit Beyond Pesticides.

Unlike most rural residents, Kastel has a high-speed broadband connection with fiberoptic cable running to his doorstep. He uses two webcams and an iPad for video conferences and pays attention to lighting and the background for presentations.

“One of the tricks is to have the lighting source in front of you, not behind you, and to have whatever is in the background look somewhat professional. You don’t want to have the dirty dishes there,” he said.

He has a studio-quality microphone for doing radio interviews carried on National Public Radio and a landline telephone for better quality sound than a cell phone.

“If your livelihood is dependent on communicating with people, I really recommend the landline, a real phone,” Kastel said.

Working from home is here to stay

Even after the pandemic ends, human resources experts say, more telecommuting is coming as employers face talent shortages and, increasingly, people aren’t willing to relocate for a job.

A study co-authored by Kelly Delaney-Klinger, an associate professor of management at the University of Wisconsin-Whitewater, showed that telecommuting yielded positive effects and, essentially, did no harm.

Telecommuters want to be seen as good citizens of the company in order to justify their flexible work arrangements, according to Delaney-Klinger.

They feel compelled to go above and beyond to make their work presence more visible and to make themselves known as an asset. In fact, they almost overcompensate by being extra helpful because they know in the back of their mind that their special arrangements could easily go away, the study found.

Kastel has worked from home for more than 30 years and says he wouldn’t have it any other way. “It not only saves a lot of money, especially if you consider depreciation on a vehicle, it saves a tremendous amount of time,” he said.

He sometimes does conference calls while getting in some exercise on cross-country ski trails or walking through the woods.

He encourages his colleagues to do the same.

“There’s nothing I can’t do remotely. I am as comfortable working from here as I am in my office in Washington,” he said.

Stick to a routine. Don’t just roll out of bed and connect to work. Wake up, have some coffee or tea, exercise, get showered and dressed just like you’re getting ready to leave the house for work.

Wherever your space is, make sure it’s organized and free from clutter, especially during stressful times. Whether it’s art, photographs or inspirational quotes, put things in your space that are meaningful to you.

If you work better in the morning, work in the morning. If you have some flexibility and you get more done after the sun goes down, stick with that. Determine what works best for you, and embrace it. Be sure to take advantage of reliable technology to make your work more productive

Unless you’re video conferencing and need to be dressed in business casual or better, wear whatever makes you comfortable — even if it’s sweatpants, T-shirt and baseball cap. Sit in a comfortable chair, in a room with good lighting. For those who spend a lot of time chatting on the phone for work, a hands-free headset is a more comfortable choice compared with holding a handset up to one’s ear. This is especially true for those who like to multitask, such as typing on a computer while talking at the same time.

While it boils down to personal preference, having a home office is a good idea for a couple of reasons: You might work more efficiently without distractions, whether it’s the tempting snacks in your kitchen, a loud television or hearing the kids argue over a toy. Closing a home office door means your colleagues or clients are less likely to hear the dog barking at a squirrel seen through a window. (Another tip: Get to know your phone’s mute button, too.) And you might need a separate home office for any tax credits and write-offs you’re looking for. Distractions are bad, but breaks are good. Take them, but then go back to work.

An essential item is a good computer, whether you choose a desktop with a large monitor or a portable laptop you can deploy throughout your home. Be sure it has a comfortable keyboard, a camera for video calling and cybersecurity software to protect your (or the company’s) information. A good backup solution, like a solid-state drive, is key, too, in case of a power outage, virus, internet or hardware malfunction.