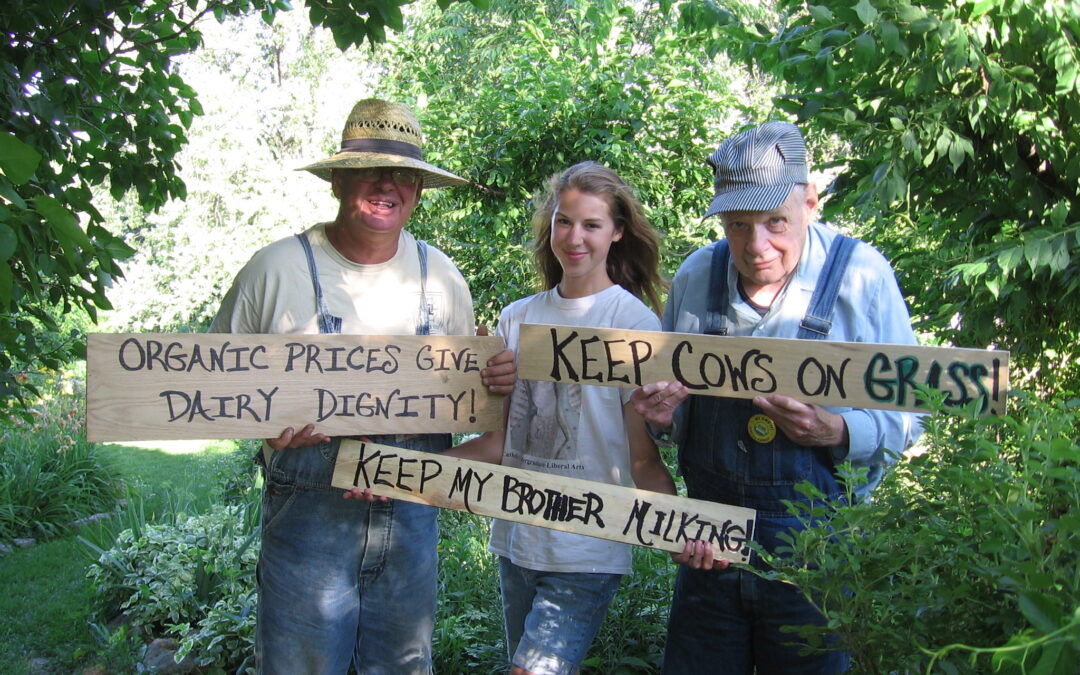 Washington, DC — Continuing a trend well established by prior Republican and Democratic administrations, four of the five newest appointees to the National Organic Standards Board (NOSB) have a current or past relationship with the industry’s major lobby group, the Organic Trade Association (OTA).

The NOSB was created by Congress, through the Organic Foods Production Act of 1990, to act as a buffer against agribusiness lobbyists in recognition that the importance of organic foods and practices to consumers, family farmers, and environmentalists was not shared by the U.S. Department of Agriculture (USDA).

Big Food has consolidated ownership of most of the largest and best-known organic brands. At the same time, many have criticized USDA for “stacking” the board, which is charged with guiding the regulatory oversight of organic farming and food production, with members from, or friendly to, corporate interests.

OrganicEye, the investigative arm of Beyond Pesticides, has issued an industry briefing paper profiling the reach of the industry’s most powerful lobby group, the Organic Trade Association, into the NOSB, which is designed to establish a direction for the National Organic Program.

The analysis of the board shows that over 70% percent are intimately affiliated, as members or in some other professional capacity, with the OTA.

The NOSB was established to ensure that the voice of organic farmers and consumers drove the direction of USDA’s organic program when there was grave concern about handing over the budding organic farming movement to conventionally-focused government bureaucrats and the corrupting influence of corporate agribusiness.

“Past administrations have favored members of the NOSB affiliated with the Organic Trade Association, but the shift is now almost complete by virtue of the Trump administration appointees to five-year terms,” said Mark A. Kastel, Director of OrganicEye. In addition to the shift to corporate-friendly NOSB members, during the Obama administration the USDA stripped the congressionally empowered panel of its ability to set its own agenda and work plan. “Recent history has made a mockery of the original intention of the board to act as an independent body receptive to the interests and concerns of all organic stakeholders,” he continued.

“I’ve attended too many NOSB meetings and watched industry players pay lip service to the integrity of organics while voting to include materials in organic food, even carcinogenic materials, like carrageenan and nitrate-rich conventional celery powder for processed meats,” said Jim Gerritsen, an organic farming elder from Maine and president of Organic Seed Growers and Trade Association.

“Even more important than the decisions on individual materials are the failures to hold USDA accountable on processes and practices,” points out Jay Feldman, Executive Director of Beyond Pesticides. “This has been shown by the Board’s inaction when faced with USDA’s change of rules on sunsetting temporarily allowed materials, allowing hydroponics to be certified organic, and permitting environmentally damaging livestock practices to be certified organic,” he continued.In a move that some see as a further attempt to consolidate power, the OTA is currently partnering with some members of Congress to introduce legislation, the Continuous Improvement and Accountability in Organic Standards Act (CIAO).

“When there was a healthier balance of power on the board, and they flexed their muscles by, as an example, banning antibiotic use on tree fruit in organic production, members of the OTA called the move a ‘travesty’ and suggested that the NOSB was ‘out of control,’” said Kastel. “Now that the lobbyists are in the driver’s seat, we have concerns about the unintended consequences of their proposed legislation.”

Instead of the overreliance on lobbyists to help write laws (which is all too common in Washington), OrganicEye is strongly suggesting to members of Congress, USDA Secretary Thomas Vilsack, and the members of the NOSB, to create balance by amplifying the voices of the nonprofit public interest groups that have, for decades, helped launch, nurture, and monitor the growth of organics. The eight most prominent groups include:

“The OTA has spent years, and invested untold corporate dues, in honing the persona that it is a charitable group working in the interest of the public when, in fact, it is a ruthless lobby group that has crossed swords with the nonprofit groups on virtually every controversial issue before the NOSB and in the organic movement,” Kastel lamented.

New appointees to the NOSB include: Amy Bruch, a farm operator and consultant whose company describes itself as an “industry partner” to the Organic Trade Association and regularly promotes their programs; Logan Petrey, a manager with Grimmway Farms, an OTA membermanaging 50,000 acres of production in the US and Mexico (another Grimmway staff member sits on the OTA board); Kyla Smith with Pennsylvania Certified Organic (PCO), a very active OTA member which has had past representation on its Board of Directors; Carolyn Dimitri, Associate Professor in the Department of Nutrition and Food Studies at New York University and member of the Scientific Board at The Organic Center (an OTA affiliate headquartered in the lobby/trade association’s offices); and Brian Caldwell, who is retired from Cornell University and owns a certified organic nut farm in New York.

OrganicEye’s Mr. Kastel said the organization would assume that all NOSB members will carry out their duties objectively to serve the overall public and will not criticize any individuals unless their established voting records demonstrate a basis for concern.

As it has done previously, OrganicEye filed a request under the Freedom of Information Act (FOIA) for the application packages of all nominees to the board, including some eminently qualified, but less politically connected, candidates that were passed over.

The organic industry has been in this same position before, watching USDA officials bypass highly qualified candidates who have applied for seats on NOSB, instead choosing agribusiness-connected candidates who oftentimes have a very minimal history of involvement in the organic movement.

“After serving five years on the National Organic Standards Board myself,” said Jay Feldman, Executive Director of Beyond Pesticides, “I have witnessed the weakening of independent voices that advance positions that meet the expectations of organic consumers. The work we do through Beyond Pesticides/OrganicEye is designed to empower diverse stakeholders, so we can put pressure on our governmental officials and on the brands that betray true organic values in the marketplace.

MORE:
While OrganicEye is ramping up the fight against weakening the NOSB, through marketplace education and other efforts, others are strictly focusing their attention on marketplace activism in an effort to save organics.

Some of the most prominent, and still independently owned, brands in the organic industry made their opinions clear concerning the activities of the Organic Trade Association by, very publicly, resigning their memberships. These businesses included Nature’s Path, the largest producer of organic breakfast cereals and granola; iconic Dr. Bronner’s soaps and organic food products; and superfoods pioneer Nutiva.

A few years before his semi-retirement in 2018, and eventual resignation in 2019, from the public interest group he helped found, The Cornucopia Institute’s Will Fantle broke with his tradition of attending biannual NOSB meetings.

“The USDA’s trick is that they give us two or three exemplary appointees on the board at any one time and, on some votes, there are a few of their more independent colleagues who will follow their lead. But it’s generally never enough to be effective in terms of promulgating policy that protects and defends the organic farming movement.”

Pioneering organic farmers who lobbied Congress to pass OFPA won approval for a provision that pushes the board towards consensus by requiring that all “decisive” votes by the board be passed with a two-thirds supermajority. Mr. Fantle continued, “The original supporters of the legislation would never have imagined the board becoming as corrupted as it has by corporate influence.”

“On controversial issues, that’s an insurmountable requirement with the board stacked with individuals from the corporate sector,” added Mr. Fantle.

Recent amendments to the Organic Foods Production Act made by Congress codify the diminishing role of working farmers on the board by allowing employees of vertically integrated industrial-scale operators, like Grimmway, to fill seats previously earmarked for working organic farmers.

“For all of us who want to protect the marketplace option of supporting production of more nutritious food, intelligent environmental protection, and economic-justice for farmers, it is imperative that we continue to fight to protect the organic label,” Beyond Pesticides’ Feldman stated.

Feldman continued, “With increasing awareness of the value of organic production in fighting for climate and environmental health, advocates for organic integrity are looking for more balance among family farmers, environmentalists, and consumers in carrying out the underlying principles and values in the Organic Foods Production Act—a groundbreaking statute that establishes standards and public process for determining organic-compatible materials.”

About Beyond Pesticides
Beyond Pesticides is a 501(c)3 nonprofit organization headquartered in Washington, D.C., which works with allies in protecting health and the environment with science, policy, and action to lead the transition to a world free of toxic pesticides. Learn more at www.beyondpesticides.org.