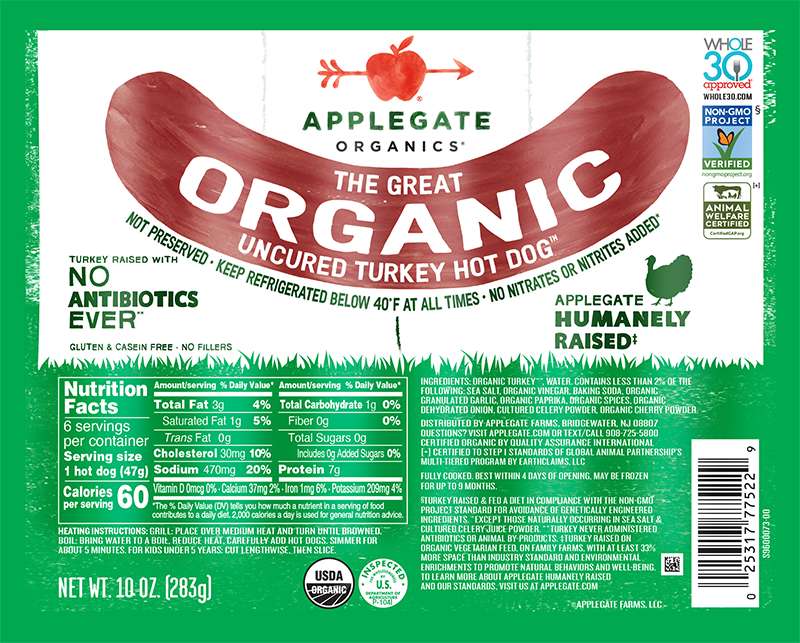 The Applegate Farms brand, now owned by agribusiness giant Hormel, asserts there are “no nitrates or nitrites added*” on their conventional and organic labels although their ingredient lists contain “cultured celery juice powder.” If you follow the minute asterisk after their prominent claim, they admit: “except those naturally occurring in sea salt and cultured celery juice powder.” Because large quantities of synthetic nitrogen-based fertilizers are necessary to grow the celery for this application, “naturally occurring” is quite a stretch.

OrganicEye, a Wisconsin-based farm policy research group, filed the petition on December 14 calling for the removal of conventionally-produced high nitrate celery powder currently approved as a preservative in organic meats. The World Health Organization (WHO) categorizes cured, processed meat as a carcinogen.

“The law, and the intent of Congress, is perfectly clear. The USDA needs to protect the integrity of the organic food label as the last haven for shoppers looking for safe and nutritious food,” said Mark A. Kastel, Executive Director of OrganicEye.

When Congress passed the Organic Foods Production Act of 1990 (OFPA), it required all synthetic or non-organic ingredients to be reviewed by the National Organic Standards Board (NOSB), an expert, diverse, multi-stakeholder panel. The directive in the law was to prohibit any material that was “harmful” to the environment or human health.

“Clearly, being considered carcinogenic in a multiplicity of published, peer-reviewed research, and categorized as such by an authoritative body like the WHO, leaves little room to interpret the use of a carcinogenic compound as being safe,” declared Kastel.

Since synthetic nitrates used in conventional food could not be approved for organics, meat processors turned to celery powder, derived from plants that are very adept at uptaking copious amounts of the synthetic nitrogen that is applied to soil where they are grown.

According to Harvard University’s T.H. Chan School of Public Health, “so-called ‘nitrate free’ processed meats are often preserved with celery juice, a plant rich in all nitrates. The source of nitrate added for meat preservation will likely not matter.”

“Ironically, even though celery powder is considered ‘natural,’ this food ingredient imparts more nitrates in the meat than the synthetic form of the preservative,” said Peter Geraghty, an attorney and lead OrganicEye researcher on the petition. “And in human digestion, nitrates are broken down to form carcinogenic nitrosamines.”

For years, work by the WHO’s International Agency for Research on Cancer has well documented the relationship between the formation of N-nitroso compounds and stomach and other cancers. The agency classified processed meat as a Group 1 carcinogen, the same category as tobacco and asbestos.

Additionally, the fact that the USDA has allowed organic and conventional processed meats preserved with celery powder to be labeled as “uncured” has come under intense criticism as being deceptive. A prior citizen petition filed by Consumer Reports called upon the USDA’s Food Safety and Inspection Service to the ban the deceptive labeling in all processed meats, both conventional and organic. Other public interest groups, including the American Cancer Society, backed their initiative.

With 75% of the NOSB members charged with vetting synthetic and non-organic substances for safety having some affiliation with the industry’s major lobby group, the Organic Trade Association (OTA), public interest groups are increasingly questioning the objectivity of their review, analysis, and recommendations.

“The response by the industry lobby and the USDA to medical, scientific, and consumer concern about the deleterious impacts of nitrates in organic food has been disingenuous, to say the least,” stated Kastel.

“While the OTA and some of its major agribusiness members have backed research to develop organically-sourced high-nitrate celery powder, we contend that replacing the currently allowed conventional carcinogen with one that is organically-sourced is a cynical ruse,” Kastel added. “All it accomplishes is creating an organically-grown carcinogen.”

There are a number of other natural materials that have been banned in organic production, such as tobacco (used as a pesticide), arsenic, and certain botanically-based insecticides that pose occupational dangers.

OrganicEye is also preparing a second petition urging the removal of carrageenan, approved in organic production by the USDA. Carrageenan is a common ingredient in dairy and nondairy products as well as in some processed meat products. While industry-funded studies indicate that it is safe, independent research backed by the National Institutes of Health has concluded the material is a potent inflammatory agent and carcinogen.

“Make no mistake about it, these efforts by OrganicEye are an end-run in an effort to bypass the USDA that has been ignoring federal law to the detriment of organic eaters,” said Kastel. “If we are unsuccessful through the legal petition process, we will undoubtedly seek a judicial remedy.”